"Yes, I know that all these books about "life after death "

are very naïve. But they lead somewhere; there is something

behind them, something I approached before; but it

frightened me then, and I  fled from it to the bare and

THIS IS the reality which I dimly felt long ago, but which

escaped me then. NOW I see my way; I see my work, and

I see where it may lead.

The Hague Conference [1907], the newspapers, it is all so far

from me. Why is it that people do not understand that they are

only shadows, only silhouettes, of themselves, and that the

whole of life is only a shadow, only a silhouette, of some other

life?"
P D Ouspensky - Introduction to A New Model of the Universe 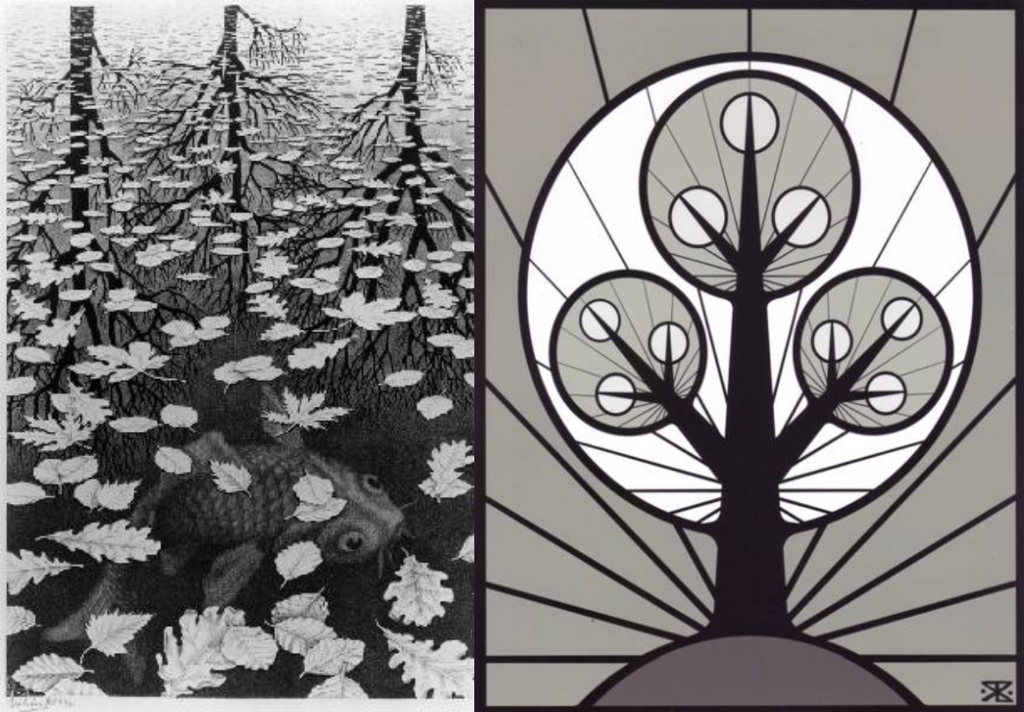 In the context of Carl Jung's four priority functional types, sensation, thinking, feeling and intuition; which correspond to the obvious means by which consciousness obtains its orientation to experience - Ouspensky's 'thoughts' on the matter ...

"Thought does not grasp, does not convey, what is at times clearly felt. Thought is too slow, too short. There are no words and no forms to convey what one sees and knows in such moments. And it is impossible to fix these moments, to arrest them, to make them longer, more obedient to the will. There is no possibility of remembering what has been found and understood, and later repeating it to oneself. It disappears as dreams disappear. Yet at the same time this is not so. I know it is not a dream. In these experiments and experiences there is a taste of reality which cannot be imitated and about which one cannot make a mistake. I know that all this is there. I have become convinced of it. Unity exists. And I know already that it is infinite, orderly, animated, and conscious. But how to link "what is above" with "what is below"?"

As a boy totally restricted to experiencing the world in my head, by

the time that I was 10 years old, I had only read just one book of fiction;

Swiss family Robinson, which I had been encouraged to read in order that

I could pass the English Exam to gain access to the local Grammar School.

My parents and maternal grandparents, however, had already taught me

to play cards, to no doubt stimulate my mental arithmetic capability, but

an important consequence of this resulted in a fascination with the

juxtaposition of the symbolism between, hearts, spades, clubs and

diamonds, along with Jacks, Queens, Kings and Aces; and so it was, much

latter in life, that I became aware of the significance of Lewis Carol's

Alice in Wonderland and Carol's subsequent a[maze]ing forward to

To quote Ouspensky ... "At last a certain whole becomes formed in my mind. I see the unbroken line of thought and knowledge which passes from century to century, from age to age, from country to country, from one race to another; a line deeply hidden beneath layers of religions and philosophies which are, in fact, only distortions and perversions of the ideas belonging to the line... Who knows, for instance, that an ordinary pack of playing-cards contains a profound and harmonious philosophical system? This is so entirely forgotten that it seems almost new... and I realise that the "fourth dimension" is the bridge that can be thrown across the chasm between the old and the new knowledge. And I see and find ideas of the fourth dimension in ancient symbolism, in the Tarot cards, in the images of Indian gods, in the branches of a tree, and in the lines of the human body."

I have forever associated it with the the continuum of  "LIFE and DEATH",

each without knowledge of the other. This IS the drawing which first

introduced me to the idea of the fourth dimension, duly supported no

doubt by Escher's brilliant take on the subject. 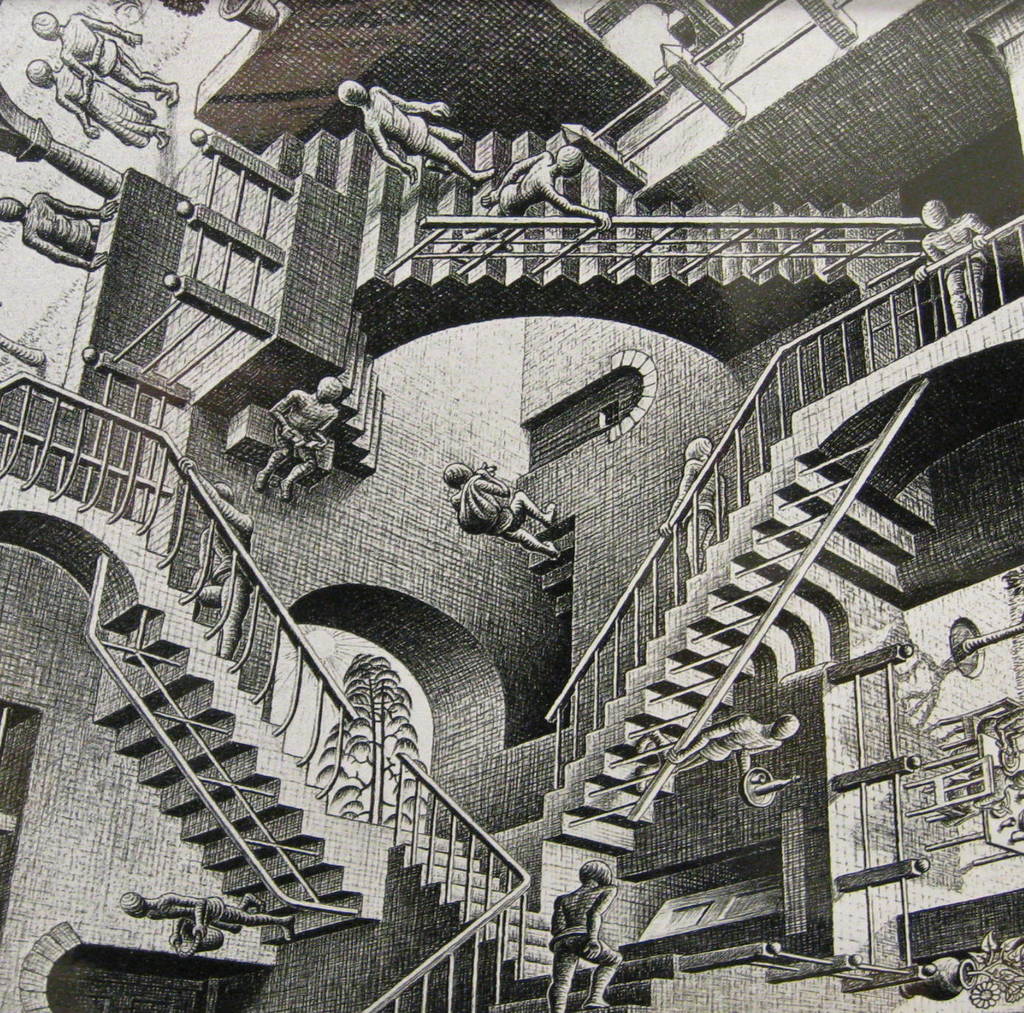 When [RE]reading the works of P D Ouspensky, I can also relate to his own

frustrations of BEING one of the NORMAL ONES, in the context of my own

as well as Physics and Art, as 'ALL being just ONE subject'. Living organisms, the bodies of animals

and human beings, are built on the

In order to understand these principles,

of symmetrical motion. Let us imagine a

cube composed of 27 small cubes, and

let us imagine this cube asexpanding and

contracting. During the process of expansion all the 26 cubes lying

approach it again. For the sake of convenience in reasoning and in

molecules, let us suppose that the cubes have no dimension, that they

are nothing but points. In other words, let us take only the centres of

and with each other. Visualising the expansion of this cube, composed

of 27 cubes, we may say that in order to avoid colliding with another

cube and hindering its motion, each of these cubes must move away

from the centre, that is to say, along the line which connects its centre

with the centre of the central cube.  This is the first rule: In the course

of expansion and contraction molecules move along the lines

which connect them with the centre.

and his explanation of the DENSITY / DESTINY of EVERYTHING

Further, we see in our cube that the lines connecting the 26 points

with the centre are not all equal. The lines drawn to the centre from

centre from the cubes lying in the middle of the sides of the large cube.

If we suppose that the inter-molecular space is doubled by expansion,

same time doubled in length. The lines are not equal; therefore

molecules move with unequal speed, some of them faster and some

slower; those further removed from the centre move faster, those lying

nearer the centre move slower. From this we may deduce a second rule:

The speed of the motion of molecules in the expansion and

contraction of a body is proportional to the length of

the lines which connect these molecules with the centre.

Observing the expansion of the big cube, we see that the distances

between all the 27 cubes are increased proportionally to the former

distances. If we designate by the letter a lines connecting the 26 points

with the centre, and by the letter b lines connecting the 26 points

with each other, then, having constructed several triangles inside the

expanding and contracting cube, we shall see that the lines b are

lengthened proportionally to the lengthening of lines a.

From this we deduce a third rule: In the process of expansion the

distance between molecules increases proportionally to the

increase of their distance from the centre.

at an equal distance from it. Moreover, if we look upon this motion not

from the centre, but from any one of the points, it will appear to us that

this point is the centre from which the expansion proceeds, that is to

say, it will appear that all the other points retreat from or approach this

point, preserving their former relation to it and to each other, while this

point itself remains stationary. "The centre is everywhere!"


The laws of symmetry in the structure of living organisms are based on this last rule. But living organisms are not built by expansion alone. The element of movement in time enters into it. In the course of growth, each molecule traces a curve resulting from the combination of two movements, movement in space and movement in time. Growth proceeds in the same direction, along the same lines, as expansion. The conditions of expansion, that is, the third rule, ensure the most rigorous symmetry in freely expanding bodies, because if points which were originally at an equal distance from the centre continue always to remain at an equal distance from it, the body will grow symmetrically. 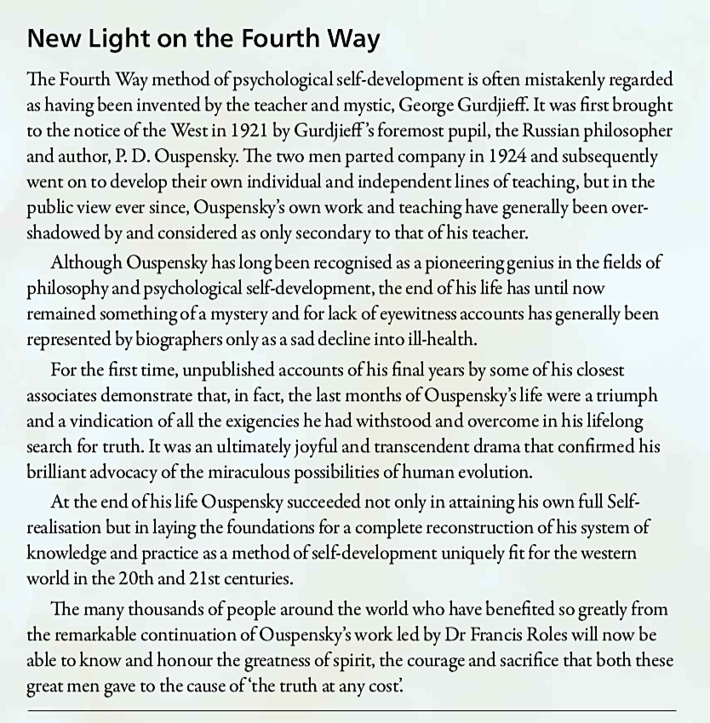 ‘This is essential reading, a remarkable book, clear and compelling, that throws an entirely new light on the further development of Ouspensky’s Fourth Way teaching. Dr Francis Roles was surely one of the unsung heroes of the 20th century’s drive to understand the true nature of consciousness and spiritual development in the context of modern science and medicine.’

‘Students of the Enneagram around the world will find this book a uniquely rich source of genuinely new insight and understanding.’